But the wife said she was going to take me for my birthday day out so we ended up at the Bike Show in Edinburgh today – and i’m glad we did. There was a lot more there than the previous two years (imo) and we managed to spend 4 whole hours looking around. A massive improvement on the 2 hours spent last year!

Area 51 had a massive area with heaps of customised machines on display, and a competition allowing us plebs to vote on their favourite bike. Later on they had bands playing too, and a good atmosphere to boot.

Plenty of good bargains were to be had if you were on the lookout for new clothing and gear, as long as you can tell the difference between quality and complete kack!

If I go next year it WILL be on the bike… 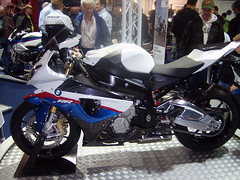